Reflexology comes in many varieties, from Chinese, Indian and Western but all draw on correspondence zones or anatomical relationships as we might call it. Incorporation of acupoints and the meridian system is common in Chinese versions and is now appearing in Western reflexology approaches too. Mudras also can be used with Reflexology.
Reflexology


Reflexology or Zone Therapy is a popular self-help type of alternative treatment which has existed for millenia but most recently in the Western world has been associated with American authors starting with Dr Fitzgerald who studied it in Germany at the end of the 19th century. He never mentioned learning it in Germany but it seems likely that the Germans were also using versions they learnt in the Orient.

Eunice Ingham studied zone therapy with Dr.Fitzgerald but as she was a nurse and not a doctor she was not accepted as well by the medical profession (the whole thing is about money and monopoly!). Her relative Dr Byers carried on her popularizing work after she retired and followed her in moving the emphasis from points on the whole body mainly to treating just the feet and sometimes hands. This emphasis on hand and foot is the approach which dominates Reflexology nowadays too, nevertheless body points are useful too.


In true American fashion these pioneers were all were good at marketing but not so good at mentioning that it was not a new therapy but an age old treatment method used in India, China and many other places including Ancient Egypt, Rome and the like. Still at least the Americans made it more accessible to the modern world in books and eventually after the war on T.V. so it has become more widely known.

Reflexology is based upon holographic reflecting areas in various parts of the body such as the feet, hands and ear although other parts of the body can also be used as was promoted originally by Dr.Fitzgerald with his Zone Therapy. As we all know there are charts in every reflexology book showing the whole body reflected on the foot, hand or ear which are the best known reflexology organs usually used.


These charts of holographic reflecting areas for various parts of the body may now prove a bit simplistic when we take account of the Dr. Paul Nogier findings on the 3 phase system of reflecting areas.

By Nogier’s findings the areas of projection for each part of the body move according to the stage of the disease process. So the liver area for instance moves according to the stage of the disease which makes things more complex than previously imagined. Books by Nader Soliman and others explain the 3 phase system for use on hand and ear and it seems likely similar 3 phase projection exists on other microsystems of the body such as foot or abdomen etcetera

There is also a zone concept which sees 10 vertical zones running through the body. This is separate from the Chinese acupuncture meridian system, and can be looked at as more of an anatomical correspondence system perhaps. Anyway these ten zones are very useful to see correspondences between one part of the body reflected in another, and they can help with diagnosis and treatment options.

These reflecting areas or reflex points seem to be part of some sort of an adjusting chain throughout the body so that massaging a point on the foot, hand or the ear for example has an effect somewhere else in the body. There are various scenarios as to exactly how this occurs in the nerves such as the vagus nerve and spine and brain and meridians, and some see it as literally just an anatomical reflex system, but we can use the fact that it occurs even if we are still a bit vague about exactly how it works.

There are two sorts of treatment in reflexology really, as there are with most health modalities, one dealing with certain acupoints and reflecting areas to relieve particular symptoms, and the more advanced sort of approach based on a more profound diagnostic knowledge, the latter is better of course but the former a lot better than nothing!

Finding people who know and can teach the more sophisticated diagnosis in health is usually difficult, and even then if you can find such training it is usually expensive. Often your only recourse is to study by yourself, and the internet and availability of millions of books on the internet is a big help in that regard.

Some Western reflexology authors nowadays try to include the Meridians as part of Reflexology, and even some Mudras, which is all to the good of course. However Western versions of Reflexology are still rather crude and lacking in theory and sophistication in my view compared say to the Chinese version.

In China too in later times Reflexology was mainly confined to village healers and looked down on by more exalted physicians.Infact herbs are only a part of Chinese medicine and all the modalities should be used together but later herbs and to some extent acupuncture became a sort of high class industry. In other words similar processes of social stratification based on economic self interest operate everywhere not only in the West.

The Western vogue for Reflexology has apparently made it more respected in China too, and one or two good Chinese books have come out extolling it’s virtues, and giving a more sophisticated diagnosis and treatment than you find in Western Reflexology books.

The well known usual map of areas on the feet for example in Western Reflexology is just one of the microsystems available, there are a great many others such as a map for each organ on the feet such as one for heart and one for kidney and so on, maps split between both feet to make a whole for example and all the related ones such as the whole body reflected on the toe and so on. In Sujok you can soon learn about many of these other microsystems and start using them. You can contact me for Sujok books as I have a few for sale.

Indications for using these points are in acupuncture books of course and in Chinese reflexology books often too, and on some charts, this is really part of acupuncture but is combined with the reflecting areas for a more total treatment option.


Learning about the acupuncture points can help a lot combined with reflexology for the same diseases, there are indications for each point and it is a more exact science than reflexology but more complex.

To sum up Reflexology in it’s various forms can be very effective even in serious diseases, even more so if you know the 3 phase system and diagnosis and even more if you can combine it if possible with other approaches such as Homeopathy, Colour Therapy and Gestalt Therapy (to try and better address the fundamental emotional causes of most diseases) to take three examples, or other modalities as needed.

It is a matter of using what you know (or what you can realistically learn in the circumstances) to design a system that works. 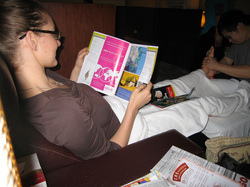 Reading a magazine whilst having your feet worked on, it may work for some.

Reflexology of course applies to ear, hands and other area of the body too.