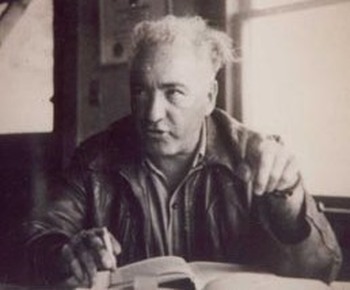 Dr Wilhelm Reich the greatest scientist of them all.

Actually working with Gestalt type techniques is not so difficult but it is a skill not well taught in most courses.

In our society the practical skills of psychotherapy have been progrssively eliminated in favour of drugs and government inspired mechanistic approaches to treatment, such as endless checklists, which are basically ways of avoiding the real human problems.

You also need some extensive practise on yourself first as in the Gestalt Therapy Book by Perls,Hefferline and Goodman, and at least some understanding of the theory behind it all, which you can also get from the same book.

Attending one or two workshops in some sort of experiential therapy helps too, although finding good ones nowadays is not so always so easy. The dead hand of the government and other vested interests has strangled this world since the end of the more free and creative 1960's.

Even so a good workshop can give you real experience seeing various people dealing with therapy in a real context.

The awareness techniques bring up resistances with their attendant anxiety if those resistances are stressed enough by the therapy. Although neurotic pain is from the past it is still painful to relive it again in the present in therapy and strong emotion is eventually released.

The whole idea of Gestalt Therapy and its techniques is to find ways of interrupting the neurotic process in a creative way, bringing the hidden unaware background into the foreground of awareness.

When using Gestalt we try to find some point of contact with the client, and this may be a dream they bring in, a physical ailment or feeling such as numbness, excitement or a host of other feelings, or something else such as an experience they had or an opinion they have developed or whatever.

This new context or point of contact can then be worked on to expand the area of awareness. If one thing goes nowhere we can try to move onto some more promising area which has emerged during working on the first one. Common sense procedure of course which we all do all the time in everyday life but perhaps worth thinking about nevertheless.

For a topical example say someone comes in with a strong dislike of Donald Trump, but in talking about that we start to move onto memories of their father but then we bog down quickly on taking that anywhere, although perhaps we notice signs such as agitation, numbness somewhere in the body or whatever.

We may be able then to use a Gestalt technique to expand on this situation. They could talk to Trump or their father using the empty chair technique. You could even get creative and have Trump and their father talk to each other in two different chairs, remember take risks and do not be too restricted in how you do things.

Or they could notice the agitation, numbness or whatever bodily connection and work on trying to contact the meaning of that by various techniques such as shuttling between the bodily feeling, image etc and where they are now or similar techniques.

Reversals are often used in Gestalt, as the reverse of a block is often the real situation which is being hidden. See my page on techniques for a rundown on various techniques and possibilties.

Sometimes it is easier to approach something indirectly, for example they might look at a painting or a sculpture in the room and you then ask what they think of the painting or whatever, and the real situation in therapy will often be illuminated by what they notice in the painting, or what colour it is or the atmosphere of it.

For example there may be a female figure in one corner of the painting who looks very forlorn (at least to your client), which may trigger feelings about the patient's mother, sister, girlfriend etc and the past family situation (or indeed the present family situation). This is just one possibility of course, the indirect approach could lead anywhere.

​In other words unfinished situations in therapy are always present but often in a disguised form because of defences against the charged emotional meaning of the block.

Approaching the more highly charged emotional blocks takes time and requires a good deal of exploration of the whole situation, it cannot be done by just trying to batter down all the resistances in an unscientific way.

On the other hand sometimes strong emotions have to be contacted and dealt with therapeutically, after all it was severe original trauma and emotional repression which made it necessary for us to set up blocks and develop armoured character structures in the first place.

In order to fix this neurotic structure it must be relived in therapy or the unconscious attitude worked on and understood (depending on the type of block) which creates strong anxiety as the resistances are pressured.

So trying to do everything by just being there with the person as many unscientific therapists nowadays think is all that is required, is going nowhere therapeutically.

If something is avoided there is a good reason for it, so we approach it indirectly and from various angles until hopefully we can resolve it or at least make some progress in resolving it.

Trying to just crash through the emotional blocks like a bull at a gate is a recipe for disaster. Human emotional circumstances need to be treated with respect and therapeutic knowledge.

Perhaps you can see better now that using Gestalt techniques can be much more effective than just talking about things endlessly, as most therapists do.

​Indeed talk therapy only soon bogs down and the resistances do not get stressed enough or understood well enough to make progress.

So we do not use awareness techniques all the time, and we must use them in the therapeutic context not in a mechanistic way like a pre-determined program, but they are essential often to build on the developing awareness of repressed material in a structured way.

The idea is that the real unfinished situation is always trying to come back into consciousness to be resolved, so we just need to see how the person is avoiding that.

​This avoidance can be by the way they restrict their breathing in various ways, constant talk or indeed constant silence, going numb, becoming dizzy, throwing in red herrings or a great many other ways of avoiding.

Physical symptoms are one of the more obvious ways of blocking emotional release. Dizziness, weakness and lots of other ways of blocking emotioally charged situations exist, and can often be relieved by Gestalt type techniques in therapy. Indeed most diseases have ultimately been caused by emotional blocks (character structure) over a long period.

First there are the character symptoms or psychological symptoms of the emotional blocks, then eventually the body has been so disrupted in its normal energy flow that real physical symptoms develop such as diabetes, arthritis and dozens of other diseases.

​Of course orthodox medicine and psychology have no interest in all this profound knowledge as it interferes with their business model of drugs, operations and at all costs avoiding human emotions.

​Let us look at a few more possible examples in therapy.

There is no sense in my trying to reinvent the wheel, so for detailed information go to the book "Man in The Trap" by Dr Elsworth Baker, but here we can recap some basic ideas.

​Other blocks usually exist but they do not determine your overall character structure, they only complicate the basic situation. For example an arm block may give you cancer or arthritis of the arm due to the emotionally caused energy flow restriction, but it does not alter your type of character
structure which is caused only by your erogenous zone type of block.

The first stage of development is the Ocular stage and this gives us Schizophrenia for example. It also gives autism. Most of the population has an eye block to some degree but it is only when it is the primary block from the first weeks of life that you have an ocular character such as in Schizophrenia.

The next stage is the Oral stage, where the patient is arrested at basically a childish stage, so we get a helpless timid adult who lacks energy and confidence. The energy must be built up so the patient gets used to it in the safe therapeutic environment, and a lot of character analysis is required to reach health.